The Reality of Puppy Farming

I had the very unpleasant experience of visiting a puppy farm . Why you may ask?

Bernese Mountain Dog pups were being advertised for sale in local newspapers and on several websites. We arrived just after tea-time on a very hot June evening and were greeted by twenty to thirty dogs running about the property. These were mostly Yorkshire Terriers, Shih Tzus and some Chihuahuas. Many of these small dogs were in poor condition - matted coats, runny eyes and some limb deformities. We asked, “Could we see the Bernese pups you have for sale?”

We were told to follow her up behind several other sheds which all contained dogs and puppies.
The track we were taken up was overgrown with brambles, nettles, long grass waist-high in some places. It obviously wasn’t used very often. Nothing could prepare us for what we were about to see. In front of us stood - and the only way I can describe it was - nothing more than a tin cage roughly 8x6 in size and inside stood a female Bernese, her eleven week old puppy bitch, three 5 month old male Bernese, a Shih Tzu with one eye and a Jack Russell puppy. 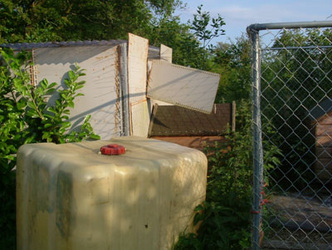 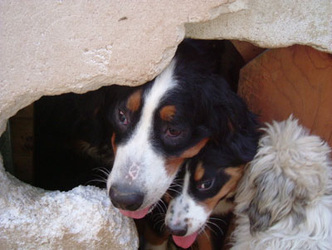 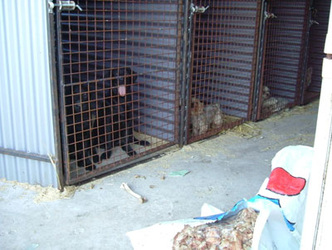 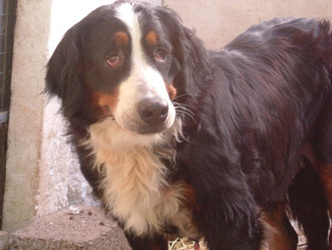 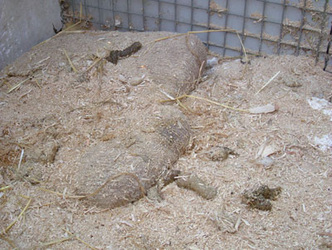 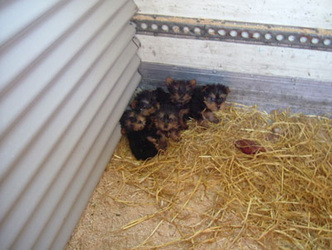 We were asked if we would like to go in and after she had un-padlocked the door we went inside - shock, horror and total disbelief. Two paint tins sat by the door, one containing about 3 inches of stinking green water and on the lid of the other roughly 5lbs of the off-cuts of processed raw chicken sat, the bones and feathers still visible. The smell coming from this was rancid, you could not stand inside for more than a couple of minutes without wanting to vomit.

On the floor lay cushions from an old settee, wooden pallets, a urine stained duvet and fecal matter. She obviously made an attempt knowing we were coming as saw dust had been thrown down on top of all this debris. To the back of the shed was a hole big enough for an adult Bernese to fit through. As we approached, the dogs all fled through this. It wasn’t until we asked to see them out of the shed that we realized that the hole led to a single medium sized kennel at the back. How the all managed to huddle inside this I do not know!
Glad to be free, the puppies took flight and ran off in different directions all over the property. Peter and I tried our best to coax them to come to us. Even with the chicken I had hidden in my pocket, they could not be tempted.

The breeder admitted to us they had never been socialized and had little or no human contact.
She never let them out as she couldn’t be bothered with the hassle of putting them back in again. The only time she visited them was to give them food now and again. She also revealed she had already sold some. I only hope that whoever bought them will love and care for them after their awful start in life. As for the mother Bernese, the only way to describe her was thoroughly miserable. Her eyes were red and sore and in obvious need of veterinary care, her undercarriage looked tender and raw and her eleven week old pup was still feeding from her.

Its hard enough when we look at our own dogs and two big brown eyes look back at you, especially when you're having that biscuit with your cup of tea and say no. Can you imagine how we felt when we had to put her and her pups back into a cage and condone them to a life of misery?

Before leaving we pushed the breeder to reveal the pedigree. Bad enough was my experience, it was about to get worse. I learned that her breeding bitch was the sister of one of my own dogs. I felt physically sick.

You might well ask, what is the club doing? Well I can tell you they are doing plenty but there is a lot of red tape to cut through. Not a day has gone past from visiting these premises that I haven’t been on the phone or sending emails off, so please be patient. The hardest thing I did was walk away that night. I may not have been able to help these poor animals yet but I will keep trying and I will keep you all posted on our progress.

You as a club member can help. Please advise us of any pups being advertised and sold in your area, help us to educate people not to buy in this way as it only makes it more profitable for them to breed again. We hope to have something on the website that you can follow and add your own thoughts.
I would like to take this opportunity to thank a fellow club member and his family who also visited this puppy farm. I know they want to remain anonymous. They know who they are so please accept my thanks and gratitude.

Hopefully I will have better news for you in your next newsletter.

(Editors note: - The breeder of the mother of this litter is a caring, responsible breeder. She was conned into selling it by a brother and sister who passed them onto a puppy farmer in Co. Down, who bred with them before moving them to another puppy farmer in Co. Westmeath, who is still the registered owner of the bitch although the breeder never signed any transfer document before she ended up in this establishment. There is no way of knowing how many litters she has had in her sad lifetime.)
Please be very careful if breeding, that your puppies do not end up in a situation like this. If you have any doubts over prospective purchasers please contact the Club.